It is a fact that the immigration issue is not a black and white issue, but rather having both positive impacts and challenges for any country. Therefore, immigration is one of the most commonly debated issues in opinion surveys to explore where the public stands on immigration. The population of England had the largest 10-year period growth according to the 2011 Census since 1801 when census taking had been taken place. Scotland also witnessed a 5 percent increase in 2011 compared to the population of 2001. Migration is one of the main factors for population increase. The foreign-born population in the UK is almost doubled from 1993 to 2011. It is expected that the UK population is going to be 67.2 million by 2020 and 73.2 million by 2035. The reasons for this increase have two-fold; natural increase and more immigrants (Duffy and Frere-Smith, 2014).

This study provides an overview of perceptions towards immigration in the United Kingdom which is one of the most important issues facing the country. To what extent the opinions of UK citizens change over time is another the concept this study aims to explore. The European Social Survey (ESS) is a cross-national survey, conducted every two years, which aims to explore the attitudes and beliefs of all persons aged 15 and over resident within each participant country. European Social Survey is one of the leading social scientific endeavors which is known for its high-quality on interview procedures and sampling. Since taking a holistic approach is always better than relying on one survey question in any scientific inquiry, different questions were selected in order to snapshot the perceptions of participants. Besides the immigrant-specific questions, some control variables such as gender, age, whether born in-country and political placement scale were selected. The following table illustrates the perceptions of United Kingdom participants regarding immigration over time. 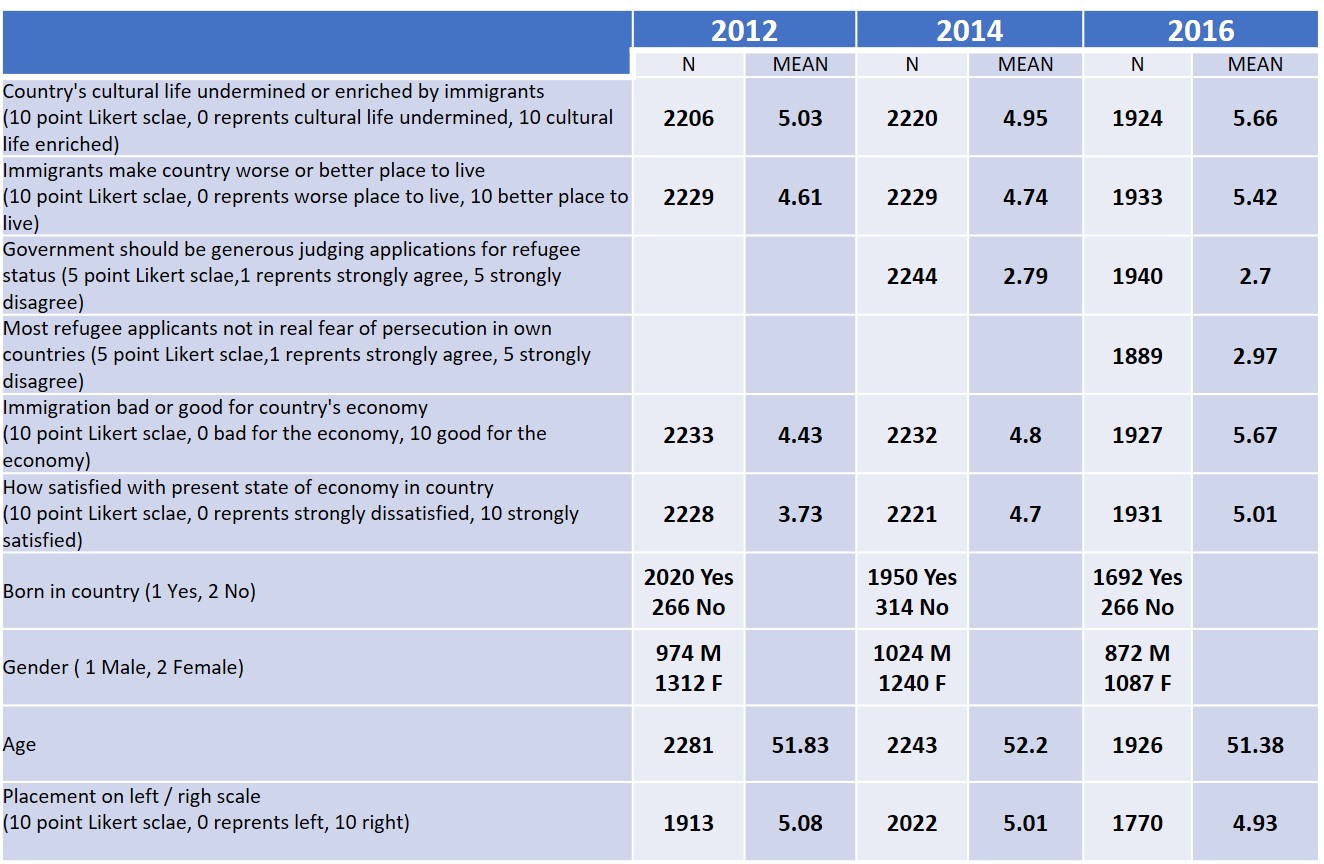 Table: Overview of Perceptions towards Immigration in the United Kingdom

It seems that people are more favorable over time that immigration makes the country a better place to live. Answers tend to be more favorable that there has been a recent hardening of attitudes in 2016 with a mean of 5.42 agreeing that immigrants make the country a better place to live compared to mean of 4.61 in 2012. By this indicator, the British people look more welcoming overtime. Another important question that was designed to monitor public views on immigration is asking people whether immigration is good or bad for the country`s economy. From an economic point of view, the results of the questionnaire indicate the extent to which British people changed their perceptions over time. It can be said that participants shifted their views in a positive direction even in a smaller amount. Their views shifted over time in a way in which they believe that immigrants had a positive impact on the economy. It is no coincidence that people are more likely to shift their views in a positive direction over time regarding immigrant impacts on the economy since their satisfaction levels with the state of the economy also shifted in a positive direction over time. In response to the question of whether the country`s cultural life is undermined or enriched by the immigrants, it seems that the views of the participants were slightly changed over time. Participants shifted their view both in negative and positive direction over time by a smaller amount. In 2016, people tend to have more favorable to the idea that cultural life is enriched by the immigrants compared to that of 2012 and 2014 respectively. Since the average age for participants in three waves is close 52, it is quite expected that the people of this age are more concerned about cultural changes that might come with immigration in their society where they used to live for a long period of time than their younger counterparts. In the 2016 wave, as the participants' age increases, they tend to have a belief that cultural life is undermined by the immigrants. Both 2014 and 2016 results revealed that British people tend to have slightly opposing views about the government`s generosity regarding judging the applications for refugee status. People think that there is no need for the government to be more generous towards the immigrants' applications. Even though it was asked in only the 2016 wave, the results of the question of whether most of the refugee applicants were in real fear of persecution in their own countries revealed that British people slightly appear to favor the idea that immigrants made their applications based on a real fear of persecution. It is really difficult to draw strong conclusions about the reasons why British people change their views and attitudes over time. However, there might be many factors that lead them to change their views. Factor that might have played a role include, but not limited to the incline satisfaction with the overall state of the economy. It might be clearly stated whether migrants contribute positively or negatively to the public purse is an important factor determining the perceptions of people regarding their views on immigration. The next section would be the comparison of UK immigration outlook with other European countries. Reference Duffy, B., and Frere-Smith, T. (2014). Perceptions and Reality: Public Attitudes to Immigration. Ipsos MORI Social Research Institute.